If you’ve seen my Instagram lately (@maddiemonmon which is private – but I’m pretty open to accepting followers), or at least have looked at the right sidebar at my two most recent photos, you will notice that I’ve been very into taking photos of architecture in New York lately. The crisp black and white filter comes from Nigel Barker’s Instagram, which is one of my favorite odes to NYC. I took an architecture class in Paris, and ever since, I’ve been more aware of architectural beauty. Here are some of the buildings in New York that I find to be five of the most beautiful.

1. The Frick Museum – One of my friends and I have joked since high school that this is our future home. Right on 5th Avenue with Cherry Blossoms that bloom in the spring, this mansion-turned-museum is quite a beautiful view from the M1 down 5th Ave.

2. St. Ignatius Loyola Church – Studying architecture in Europe means studying a lot of churches and cathedrals. That’s why I think of St. Ignatius Loyola as one of the best examples of classic architecture in NY. It is elaborate and has egg and dart and pilasters all over. You can tell it’s nestled among posh Park Avenue apartments and has parishioners like Kennedy’s by the way its beautifully kept.

3. Cooper Hewitt Museum – Formerly Carnegie’s mansion, the museum has been under construction for the past few years. But its beautiful facade and even more beautiful hardwood interiors are architectural beauty at its finest.

5. Classic Brownstones – New York’s brownstones give it much of its personality. From Carrie Bradshaw’s rent-controlled apartment everyone in New York simply dreams of, to the cute and homey brownstone Meg Ryan called home in You’ve Got Mail (shown below), brownstones are classic New York.

My architecture class is always surprising me. I had been to Invalides with some friends, but when I revisited with my class, it took on a totally different meaning. For example, I embarrassingly had no idea that Napoleon’s tomb was the Église Saint-Louis connected to the war museum.

The chapel was referred to by my professor as the most baroque building in Paris. Paris isn’t known for it’s extravagantly decorated buildings, and this building definitely strays from the pack. It’s gilding, marble, and detail all prove that it’s baroque.

It’s the home to Napoleon’s tomb, a large wooden structure in a crater in the middle of its floor. It’s a huge tomb, which is pretty funny when thinking about Napoleon’s notoriously petit frame and the fact that he was cremated.

Rumor has it, Napoleon requested that his tomb was placed lower than at the level of the spectators to ensure that people would always be bowing down to look at him. 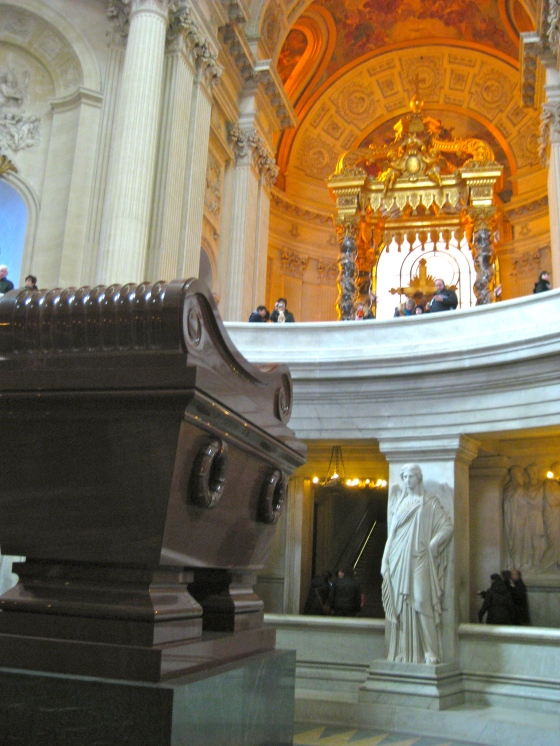 Interestingly, when Adolph Hitler came to Paris, he wanted to see the tomb of a man he so admired. He brought a mirror so that he could see the tomb without having to bow. However, he positioned the mirror in a way that caused his hat to fall off, consequently making him picking it up and “bowing.”

Inundated with history, this chapel is a must see in Paris.

It’s been quite the week. I had a huge midterm Thursday in my Paris Through Its Architecture class that (cross my fingers!) might have gone OK. Thank goodness, studying for my architecture class seemed like more of a treat than a chore. I’ve always loved history but have found that there’s a missing link in my brain when it comes to chronological order, treaties, wars, conflicts…….zzzzzzzzz.

That’s why this class has worked out so perfectly; by focusing on one aspect, like architectural developments, studying this history of Paris has been so interesting and applicable to my time here. I love looking around and seeing acanthus leaves on corinthian columns or being able to explain the history of St. Genevieve, the patron saint of Paris, to fellow Americans.

It’s moments like these where I feel like I’ve crossed into being a grown up. Wanting to do my homework? Enjoying my studying? (Similarly, I just had a conversation with my mom about wearing the hat, scarf and gloves I never wanted to wear when I was younger for fear of looking stupid, but now cling onto for dear life in the cold! Thanks Mom and Valerie for always making me bundle up!) For now, my excuse for my change in attitude will be the same excuse I’ve been using for the past two months: the Paris air has changed me.

Here’s a selection of some of my favorite places in Paris. It was hard to narrow it down, but maybe you’ll see why I chose these. Happy Friday!

Parisian Architecture by mmnewyork93 on Polyvore

All of the photos and text on this belong are my own unless otherwise cited or linked. If you would like to use any of the material from this blog, please contact me first at netflixandnutella@gmail.com.
%d bloggers like this: